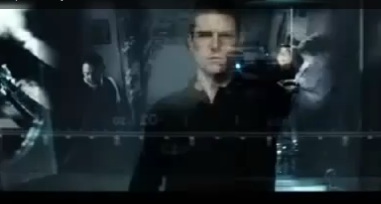 If there was one of the coolest tech moments seen in movies, Minority Report certainly had it.

At the time, it seemed more Hollywood movie magic than short-term reality.  From the reactive mood lighting matched to a holographic interface that blended information, video and real-time communication, it just didn’t seem possible we’d see something like that for quite some time.

However, those in the tech industry knew that major companies like Intel and Microsoft has b

een testing a 3D user interface for many years.  The technology however was clumsy, oversized and over-priced and therefore no one had been successful in making it commercially viable.

Then came along Wii.  This is probably most of our first experiences with a “3D” style interface with a thoughtfully simple remote/game control that works in a virtual 3D space.  This immersive experience quickly made Nintendo rich as Wii sales exploded and the new world of Minority Report-styled gaming user interfaces was officially underway.

It didn’t take long for Microsoft to catch and pass Nintendo with their “Kinect” add-on to their popular Xbox 360 gaming system.  Whereas the Wii made 3D UI seem somewhat cartoonish, Kinect certainly made if feel more real.

The explosion of mobile and tablet computing devices has made touch/swipe/zoom interfaces even more popular.  While not holographic displays, the concept is essentially the same – forget your mouse and keyboard – navigation shouldn’t require typing and hitting the ‘enter’ key.

So is it possible that the mouse and keyboard will go the way of the floppy disk, 3.5” disk, CD/DVD drives?  I wouldn’t bet against it.

Which brings us back to our ‘niche gaming systems that are now being looked at as a powerful new way of using business software.  In fact, its leading to an entirely new way of thinking when it comes to designing entire operating systems.

So there it is, a Windows OS where you can actually ‘open’ windows or a Mac OS where zoom/pinch takes you through space and time on your desktop.

This is the next big leap forward as today’s technology not only makes this approach easily affordable and viable.  The future computer desktop will finally look like a real desktop.  Where you most important items can lie in front of others and accessing key tools is as simple as moving up/over and around other items.

The speed and efficiency (while perhaps providing an added health benefit of exercise) ought to make 3D enabled user interfaces extremely popular.

At AnaTango, I can say we’re excited by these possibilities and thinking forward to the future.  All our Cloud Business Management Suite apps work just as effectively on mobile devices and tablets as they do on your desktop.  Without tipping my hand, its safe to say we’re also focusing on business application navigation/performance in new ways we hope is just as “cool” as what’s been shown here.

I can’t wait to see future OS’es take advantage of this technology in the future provided next generation passwords aren’t break dance moves.

In that case, companies may want to begin removing breakables from their office spaces.